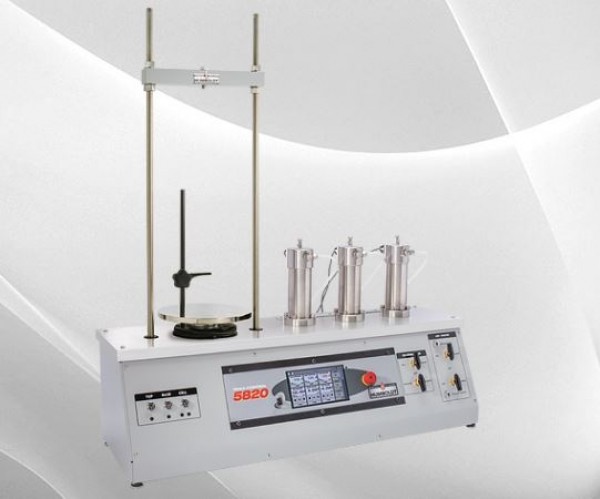 Humboldt's HM-5820 is an automated pressure controller designed to handle saturation, consolidation and permeation of a triaxial test sample, as well as perform a shear function with the use of its integral HM-5020 Load Frame. This allows the technician to also perform triaxial shear tests without having to purchase an additional unit.

Cell, head and tail pressure can be set in increments of 0.1 PSI while volume change is measured to 0.0001cc. The flow rate for permeation can be set from 1 cc/sec (60 cc/min) down to less than 0.000002 cc/sec (0.00012 cc/min). There are three data input channels – one for each pressure transducer, or if you are only doing permeability, you will only need one of the channels/pressure transducers. The HM-5820 provides an accurate and compact configuration for performing triaxial tests without the need for separate distribution panels, and simplifying tubingand control cable setup. By using the integral load frame, the HM-5820 provides an extremely compact and organized setup. The HM-5820 is built around Humboldt's integral, data logger with touch-screen control, which allows the HM-5810 to be used as a standalone device capable of full test control and data logging. It can also be controlled by a networked computer at any location with access to the network.

Stand-alone Mode
In stand-alone mode, the HM-5810 Pressure Controller provides a 7" (178mm) touch-screen controller, giving you finger-tip control of your testing processes, as well as providing real-time, visual views of your data in both tabular and graphic formats. The waterproof, touch screen provides colorful, at-a-glance monitoring of testing functions without the use of a computer. Operators can see all the data in several formats at the machine while the test is running. Data can then be viewed simultaneously from a computer or downloaded later to a computer in the lab, in the next room or at a different location, while also providing report generation capabilities from within Humboldt's NEXT software or with the enhanced HM-5007SW Permeability Software Module.

Computer Control
When operated from a networked computer the NEXT software provides robust machine and test control, and report generation. It also provides the ability to control and monitor multiple machines from a single computer. NEXT software and the enhanced Permeability module, HM-5007SW provides robust machine control, calibration, data acquisition and report generation for those who want to use a computer to control permeability testing operations.