How to activate a dynamic load

Definition of a dynamic multiplier

A dynamic multiplier can be created either in Structures mode or Staged construction mode, by using one of the following strategies:

A dynamic multiplier can be defined by a harmonic function or by a table of values. For further details on this aspect, please refer to the Reference manual.

Activation of a dynamic load

To apply a dynamic load in a given dynamic phase, the following conditions should be met:

These aspects are illustrated in the figure below for a dynamic load applied in the y-direction in PLAXIS 2D. Please note that, when applying a dynamic load characterised by more than a single cartesian component, the conditions listed above should be met for all components of the load. 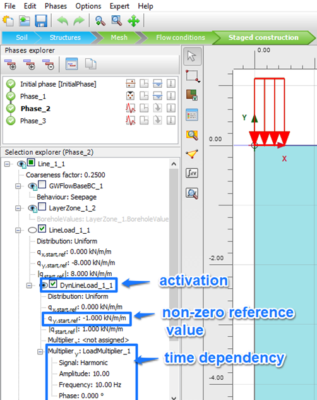 Static and dynamic components of a load

The static component of a given load is independent of its dynamic component. This means that, when both components are active for a given load (e.g., line load, as shown in the figure below), the total load applied to the model is given by the sum of its static (i.e., time-constant) and dynamic (i.e., time-dependent) components. This allows for the application of a different type of loads at a given location. For instance, it is possible to apply the self-weight of a given equipment by using a static load and the vibrations induced by that equipment by using a dynamic load, as exemplified in the Tutorial manual: Dynamic analysis of a generator on an elastic foundation. 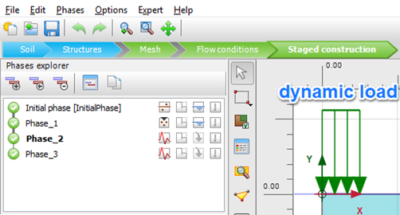 When a dynamic load is activated in a given dynamic phase, the value of each of its components (e.g., along y-direction) at each instant of dynamic time, t, is given by:

where qy,start,ref is the reference value of the dynamic component of the load and multipliery(t) is the time-dependent multiplier of the load, defined by a harmonic function or table of values, as mentioned before. 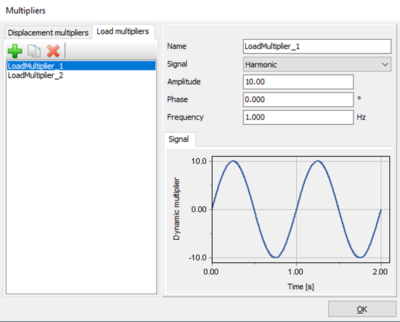